We surveyed 31 U.S. museums and examined the international auction market to determine the dismal state of play—and a few glimmers of hope. 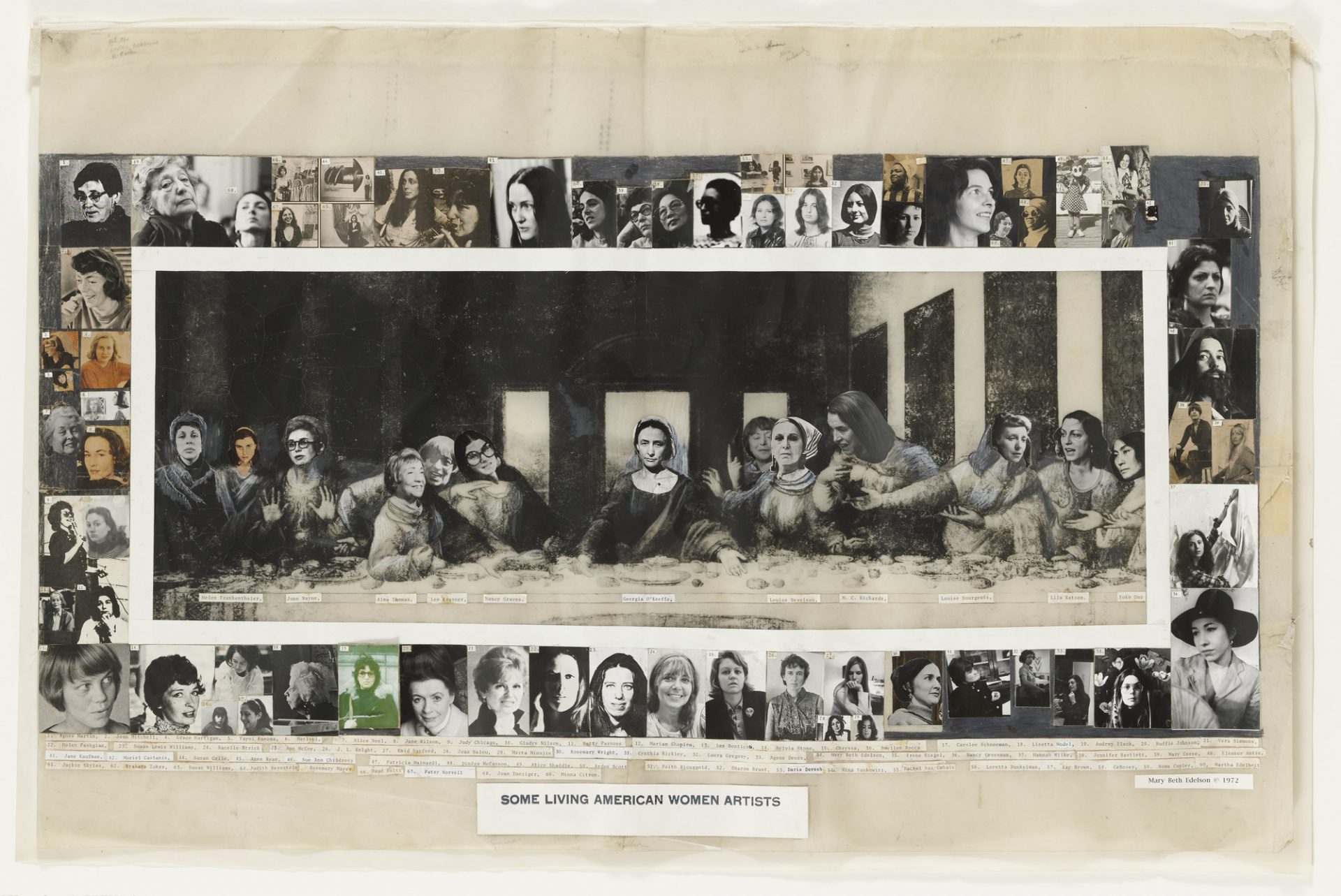 If you are looking for information on how representation in museums and the art market has evolved over time, here is a broad selection of takeaways from the Burns Halperin Report 2022.

Only 11 percent of acquisitions and 14.9 percent of exhibitions, at 31 U.S. museums between 2008 and 2020, were of work by female-identifying artists.

–Female artists created 37,539 out of the 339,969 objects acquired by museums during the period we examined.

–Women represent 50.5 percent of the United States population (as well as the global population), meaning they are underrepresented in collections by almost a factor of five.

–It might seem like women are earning more attention from museums, but the volume of acquisitions of work by women peaked all the way back in 2009.

–There has been parity in graduation rates from the country’s top art school, the Yale School of Art, since 1983, according to a recent study, suggesting women have been entering the highest levels of the professional art world in equal numbers for almost 40 years. (The study points to the cyclical nature of progress: there had been parity in the 1940s, but rates fell backwards for several decades.)

–Women account for 46.1 percent of working artists in the United States, according to data compiled by the National Endowment for the Arts between 2015 and 2019.

–Women are better represented in the senior leadership of museums than in their collections. Twenty of the 31 museums have female chief curators or deputy directors; 12 have female directors.

–There are signs that social movements can have ripple effects on collecting. Although acquisitions peaked in 2009, they approached that level again in 2017 and 2018, after the #MeToo movement took hold.

–Exhibitions of female-identifying artists increased slowly to a high in 2018, and then fell slightly in 2019 and 2020. Still, the level remained higher than in 2008.

–Purchases of work by women—objects museums bought with their own budgets as opposed to gifts from donors—peaked in 2019, suggesting museums are beginning to focus on this area internally.

–These totals are boosted by a handful of leaders in this collecting area, including the Dia Art Foundation in New York, the Pennsylvania Academy of the Fine Arts in Philadelphia, and the Hammer Museum in Los Angeles.

–West Coast museums are above the national average, with 21.3 percent of acquisitions by women.

—For comparison, $41.8 million more was spent during that same period at auction on the work of Pablo Picasso alone.

–There is little racial diversity. Seventeen of the top 20 artists are white (the other three artists are Yayoi Kusama, Julie Mehretu, and Frida Kahlo).

–The top five artists—Yayoi Kusama, Joan Mitchell, Louise Bourgeois, Georgia O’Keeffe, and Agnes Martin—alone account for $2.4 billion, which is almost 40 percent of the entire market for female artists at auction. (For comparison, the top 20 artists in the overall art market account for less than 30 percent of all sales.)

–At the current rate of growth, women’s total sales in the auction market will not approach 50 percent until the year 2053.

–The amount of money spent at auction for work by women, adjusting for inflation, has grown 174.2 percent between 2008 and 2021, the most recent year for which we have full annual data.

–The market for work by women increased sharply in 2021 and 2022. By midway through the year, it accounted for 5.9 percent of total international auction sales.

–The commercial gallery system shows a bit more equity than the auction market. Four top galleries who provided us with revenue and roster breakdowns—Lisson, Hauser & Wirth, David Zwirner, and Pace—represented between 23 percent and 39 percent female artists.

—These artists outperformed in terms of sales, representing between 26 percent and 52 percent of the galleries’ revenue.

–Black American female artists created 1,877 out of the 339,969 objects acquired by museums during the period we examined.

–Black American women represent 6.6 percent of the country’s population, meaning they are underrepresented in U.S. museums by a factor of 13. (They represent 0.3 percent of the global population; there is no data available on what proportion of working artists they currently represent.)

–The overall trend in terms of acquisitions is upward, but the numbers remain staggeringly small.

–Museums are putting their own resources behind collecting the work of Black American female artists. This is the only category in which purchases by the institutions outpaced gifts from donors, with a ratio of 56 percent of acquisitions made through purchase versus 44 percent made by gift, for the works for which we have provenance.

–Budget does not determine success. Museums in the $15 million to $20 million budget range led this collecting category, with a rate almost four times the national average.

In the Art Market

–Total auction sales remained well under $10 million annually until 2013, when work by Julie Mehretu started to sell for significant sums at auction. That year, her work alone accounted for 74.8 percent of all auction sales of work by Black American female artists. Her share peaked in 2016, when it amounted to just under 80 percent.

–In contrast to the broader female artist category, in which the top performing artists skew old or dead, the majority of the top selling Black American female artists at auction are early- or mid-career. Only four of the top 20—Alma Thomas, Elizabeth Catlett, Edmonia Lewis, and Clementine Hunter—are dead, and five fall into the ultra-contemporary category.

–Of the four galleries we examined, only one represented more than one Black American female artist: Hauser & Wirth, which represents four.

–Still—one last reality check here—their work accounts for just 0.3 percent of all auction sales in the first half of 2022.

Only 2.2 percent of acquisitions and 6.3 percent of exhibitions at 31 U.S. museums between 2008 and 2020 were of work by Black American artists.

–Black American artists created 7,370 out of the 339,969 objects acquired by museums during the period we examined.

–A 2014 analysis of U.S. Census data by BFAMFAPhD found that eight percent of working artists in the United States were Black.

–Contemporary artists are the best represented in U.S. museums: those born between 1945 and 1989 accounted for 67 percent of all acquisitions by artists for whom we have birth dates.

–The biggest jump took place between 2014 and 2015, when acquisitions of work by Black American artists spiked almost 200 percent (196.8 percent); this spike follows the founding of the Black Lives Matter movement in 2013.

–Attention was much more widely distributed in 2017, the second highest year for acquisitions of work by Black American artists.

–The Pérez Art Museum Miami, the Virginia Museum of Fine Arts, and the Museum of Contemporary Art Chicago emerge as leaders in collecting the work of Black American artists.

–Museums in the $15 million to $20 million annual budget range outperformed their peers.

–According to the Mellon Foundation’s recent art museum staff demographics survey, there has not been a significant increase in Black staff in the aggregate. But between 2015 and 2022, the number of Black staff in museum leadership roles has more than doubled, and it has quadrupled in curatorial positions.

In the Art Market

–The market for Black American artists hinges on superstars. While art by Black Americans overperforms in the global market relative to demographics (they represent 0.6 percent of the global population), attention is extremely uneven.

–Remove Jean-Michel Basquiat—the biggest star of all—and the entire market spend between 2008 and midway through 2022 drops from $3.6 billion to $1.03 billion, or around .5 percent of the total $187 billion market.

–Despite triumphant headlines, the market for Black American artists at auction dropped by 30 percent in 2019, and again by 27.6 percent in 2020. The overall auction market also fell in these years, but at a slower rate.

–For the top galleries that provided data (Lisson, Hauser & Wirth, David Zwirner, and Pace), Black American artists represented between 4.2 percent and 7 percent of their total roster. And as is the case with female artists, they overperform when it comes to sales, accounting for between 12 percent and 30 percent of gallery revenue.